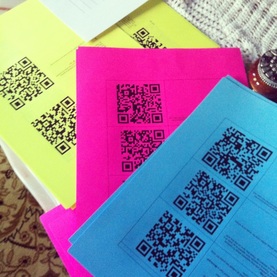 As a way to review for local government, students completed a scavenger hunt. Here students were able to use mini iPads or their devise to scan QR codes placed around the school. In connecting it to government, the school acted as a metaphor for a municipal government. For example, students would be directed to the office as they were told to head to the place where the mayor of the city would reside.

Most students enjoyed the idea of moving around the school as a way to review.  Since this was my first time carrying out the lesson, I would have had the students write some of the clues as some of the response was the clues were somewhat confusing.

The following links of this tab, are the clues that students would use to complete the scavenger hunt.  At the end of the hunt, students completed a worksheet, which they brought back to class.
Powered by